I promise not to trample you, but the truth is so important!

Let’s consider womanhood, first. The amazingly cool thing about it is that it is not manhood. Thank God!

Yet, in a way, it is. We know woman comes from man, and although they seem so different in so many ways, the whole course of a person’s life is set in motion by a tiny spec, too small to see, that is only part of one chromosome. And that is all. Yet so many true women think they are not really true women if they don’t have a baby.

Or look at the word woman.

It’s a compound word, you know. Yes, its base words are womb and man, yielding “wombman”. Whatever else you gain from reading this post, please take this truth to your heart—having a womb makes you a woman. Even if it had to be removed, even if it somehow does not work right, even if you are using birth control, you are still a woman.

But what about the “mom” thing. Having a womb can’t make someone a mom, can it? Doesn’t that require having a baby?

Don’t be too sure.

Consider the baby suffering from meth withdrawal, left in a box in a rotting alley, in winter.

By someone who has a womb and just had a baby.

What kind of mom would you call that?

You’d be right and find few objectors if you said, “That’s no kind of mom.” The state would likely agree and find a home for this child with a true mom. Who may or may not have a womb.

In fact, if someone asked you to tend to this poor child for a few hours while they found the best situation for him, you would likely agree to the task with joy.

Because being a mom is a female-heart thing. 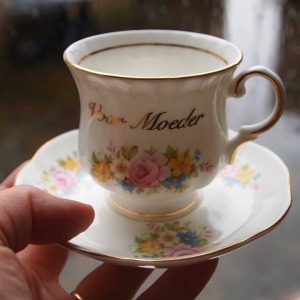 This all-purpose word, Webster, himself, who knew about 15 languages, tells us means the same thing, in all its uses.

So, the yuck in the bottom of the vinegar bottle is sort of what we are. And mud, one of its root words, is not such a humble thing as we might imagine—It is a source of life. Ask any rice farmer and he’ll tell ya’.

And another word derivative is the somewhat explosive word, matrix. (This is easier to see if you know romance languages: madre can mean either mother or matrix in Spain, for instance.) And a matrix is, first, a womb. But second, a matrix is a rock that contains a gem. And third, it is a mold for reproducing anything. And fourth, it is a framework or way of organizing things.

And the first man called the first woman Havah (Eve), meaning show or discover because she would become the mother of us all.