I need to share something with you that I have seen over and over, in so many married women. I need to share it with you, NOT because I see it in you, but because it is something that is SO easy to do and so many do it.

And because it is exactly what you have asked me about.

The thing I want to share with you is:

The Poor Wives Club is an unofficial, and quietly hidden sisterhood of women whose husbands probably are not saved, often are alcoholics, and usually do not attend church like their wives do, like their wives wish they would. And all of that to their enormous dissatisfaction.

Women in this club hang together, support each other, and depend upon each other.

It would seem there would be nothing wrong with that, right? But there is something definitely wrong.

What’s wrong is the dependence. And what they depend upon each other for.

Usually there is one woman, holier and more vocal, who is the leader of such a group, the President of the Poor Wives Club. It’s easy to find Such a woman to join, since usually you can find at least one member in almost every church. Look for frowns. Look for signs of lack of self-control. These poor women are obvious, wearing their badges of discontent so proudly, many women can see through it, and stay away.

Which is a good thing. These women who step back are wiser, in that although they might feel tempted to be a “Poor Wife”, they do not want to find themselves irretrievably locked into such a life. 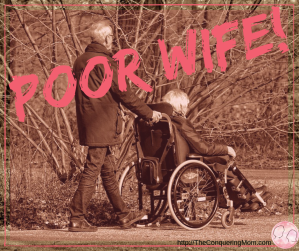 Occasionally, a husband of one of these wives somehow, miraculously finds God. His walk improves. His health may even improve. He begins laying down his addictions and becomes a pretty good husband, really.

This pulls the rug right out from under the Poor Wife.

She loses her identity.

With a saved husband who is improving weekly, she has no real reason to continue in the Poor Wives Club, yet feels insecure and aimless without it, because it has been her whole life.

She finds she has lost her entire reason for living.

To fill her life that is empty without offenses happening to her, she resorts to finding small things he has done wrong and blowing them out of proportion, to her fellow club members, and any who will listen. As her husband’s life continues its upward mobility, she finds fewer and fewer willing to listen.

This woman has two choices:

She always hoped he’d stay as he was and she always stayed married to him, to give her an excuse for sin.

I’d been thinking of this woman a lot today, and I am so glad you’ve already seen her and decided not to join her. What a relief that is for me!