Our house caught fire, once. 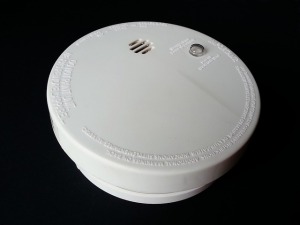 At four a.m., the Sunday before Thanksgiving, the smoke alarm sounded. I had trouble believing the smoke alarm chose that moment to malfunction. I woke my husband and we debated what the noise was.

He asked me if I had a turkey in the oven.

We could find no flames, but, sure enough, the smoke hung thick in the hallway. As my husband rushed to find the source, I rushed to get our teens out.

I found them, fully awake, but not escaping, on the balcony over the foyer.

I gave them our car keys and (probably somewhat agitatedly) ORDERED them to get out, move the car away, and stay in it.

Later questioning revealed: The heavy sleeper had not even heard the alarm. The easily-wakened one had resented the sleep intrusion, pulled the pillow over his head, and grumbled. By the time I discovered them, they had only just reached that landing, had seen me, and were waiting for instructions.

Do you have trouble believing the time for escape could come right now, that it could be happening to you, or that the alarm is really sounding?

Maybe you know it’s the alarm, but think it’s because of a minor, fixable glitch?

Are you a heavy sleeper and have trouble hearing the alarm in your sleep?

Does the alarm disrupt your agenda and make you resent it?

It is the alarm.

It sounds because a major problem is doing irreparable harm.

Change your agenda and accept this excellent chance to escape, before it is too late.

4 thoughts on “Smarter than a Worm? Let’s hope.”